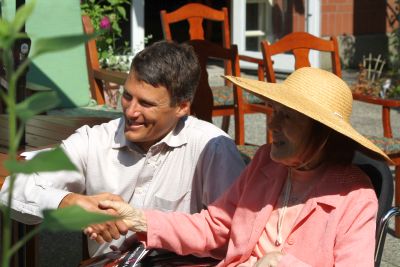 Alice, President of the Resident and Family Council presents Mayor Robertson with a gift

Along with residents, families, board members, staff, volunteers and media guests, Mayor Robertson took Yaletown House resident Brian Hewer out for a spin along the seawall. Brian said it was a thrill to be out in the community.

The bike was made possible thanks to several generous donors including RBC Foundation and Volunteer, Glen Paul. We are currently raising funds to purchase a second bike (for safety and companionship). To learn more about donating to our second bike, contact Lynn Parkin at lparkin@yaletown.org.

About the Duet Bicycle
The Duet Bicycle is specifically designed for individuals who would benefit and enjoy access to the outdoors but are unable to do so due to mobility issues, such as wheelchair restrictions or physical disability.

A 2001 study on depression showed individuals in the Duet biking programs were less depressed after two weeks of participation.

Cupid and Santa are actually related